An Introduction to Serotonin

Serotonin is a chemical messenger or neurotransmitter derived from the amino acid tryptophan. It is both a tryptamine and indolylalkylamine compound which is structurally known as 5-hydroxytryptamine (5HT) [1]. The function of serotonin is enigmatic, ancient, and plural with known roles in mood, appetite, sleep, cognition, sensory perception, temperature regulation, and sex as well as myriad other aspects of human behavior. Beyond functioning as a neurotransmitter, serotonin is also known to function as a hormone and most recently was found to be able to bind DNA and serve as an epigenetic modulator [2]. Most serotonin found in the human body is not found in the central nervous system (CNS). In fact, approximately 95% of serotonin is in the gut and functions within the enteric and autonomic nervous systems. To date, there are 14 subtypes of serotonin receptor, with the 5HT2A receptor appearing to play a key role in the effects of psychedelic substances such as psilocybin, LSD, DMT, MDMA, mescaline and others [3].

The Serotonin 2A Receptor (5HT2AR)

The 5HT2A receptor is the most widely expressed subtype of receptor in humans [4]. It is known to be critically important to the action of serotonergic psychedelics and blocking the 5HT2A receptor with atypical antipsychotics and buspirone has resulted in reduced effects of psilocybin in controlled laboratory settings [5-7]. Indeed, atypical antipsychotics such as risperidone were even engineered to be ‘perfect blockers’ of the LSD experience in rodents trained to discriminate the effects of LSD [8]. The 5HT2A receptor is also the receptor most implicated in development of serotonin toxicities when intrasynaptic serotonin is increased to levels capable of overstimulation and toxic effects. The 5HT2A receptor is distributed broadly among different tissues and cell types of the human body. It has been detected on the lining on blood vessels in endothelial tissues, cell of the immune system, as well as neurons of central and peripheral nervous systems [4, 9]. Despite compromising little of the bodies’ overall serotonin neurons, the brain has the highest density of 5HT2A receptors which exert broad modulatory control over large areas of the brain. The 5HT2A receptor is particularly dense in layer V cortical pyramidal cells, the amygdala, ventral tegmented area, and brain stem nucelli. 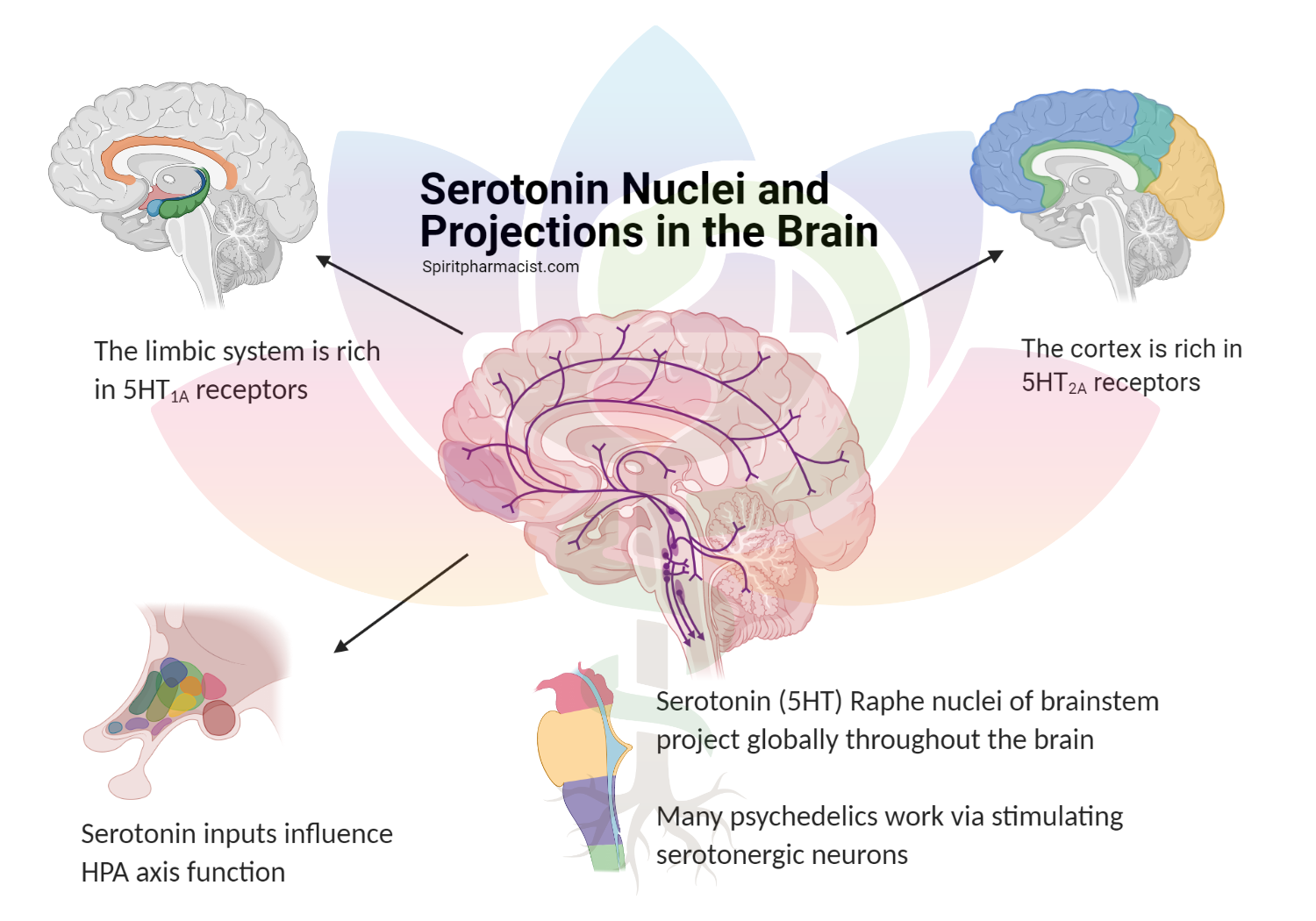 The name serotonin is derived from word roots sero meaning blood and tonin meaning tone, thus literally translates to ‘blood tone’. It was first known as a vasoactive ‘adrenaline mimicking’ substance that was discovered in blood in the late 1800’s. It was determined to be located within enterochromaffin cells of the gut when they stained positive for indole in 1937. Further staining experiments found serotonin with the GI tract, platelets of blood, and the brain. Interestingly, the discovery of serotonin as a neurotransmitter was linked to the discovery of the psychedelic lysergic acid diethylamide (LSD) as it was observed that it also contained an indole ring and produced profound mind-altering effects.

Synthesis and Metabolism of Serotonin

Serotonin is synthesized from the amino acid L-tryptophan, an essential amino acid consumed via the diet. It is converted to serotonin in a two-step enzymatic process: The first converts L-tryptophan to 5-hydroxytryptophan (5-HTP) while the second converts 5HTP to 5HT. One reason that serotonin is so often conceived of as a neurotransmitter that relates to mood is because experiments in which persons eat a tryptophan free diet quickly results in depressive mood states and is reversed with tryptophan repletion. Despite this evidence, the picture is much more complicated than low serotonin leading to depression. This is because most persons with depression do not have low dietary tryptophan or serotonin levels and drugs that boost serotonin levels (e.g. selective serotonin reuptake inhibitors or SSRIs) do not produce immediate mood elevating effects.

Serotonin is broken down both in the synaptic cleft and pre-synaptic nerve terminal by the enzyme Monoamine Oxidase A (MAO-A) to the inactive metabolite 5-hydroxy-indoleacetic acid (5-HIAA). It was discovered that inhibition of MAO by drugs called monoamine oxidase inhibitors (MAOIs) resulted in mood uplifting effects and led to the first available prescription pharmaceuticals for the treatment of depression. Use of MAOIs can result in severe adverse effects such as hypertensive crisis or serotonin syndrome when mixed with the wrong types of foods or drugs, respectively. While use of pharmaceutical MAOIs has largely fallen out of favor, the use of MAOI containing psychedelic sacraments such as ayahuasca is expanding. Awareness of how different drugs effects the levels of intrasynaptic serotonin and how they interact with each other is critically important to the safe use of ayahuasca.

Serotonin is synthesized on demand before being packaged and concentrated into vesicles by an enzyme termed vesicular monoamine transporter 2 (VMAT2). When the presynaptic nerve is depolarized by an action potential moving down the axon (electrical message), serotonin is released into the synaptic cleft (space between neurons). Once in the synaptic cleft, serotonin may bind with post-synaptic serotonin receptors (e.g. 5HT2A receptors), be broken down by monoamine oxidase, or removed from the synapse via the serotonin reuptake transporter (SERT). Therefore, drugs that target or influence these ‘major players’ such as VMAT2, SERT, 5HT receptors, or MAO tend to carry interaction potential between them. 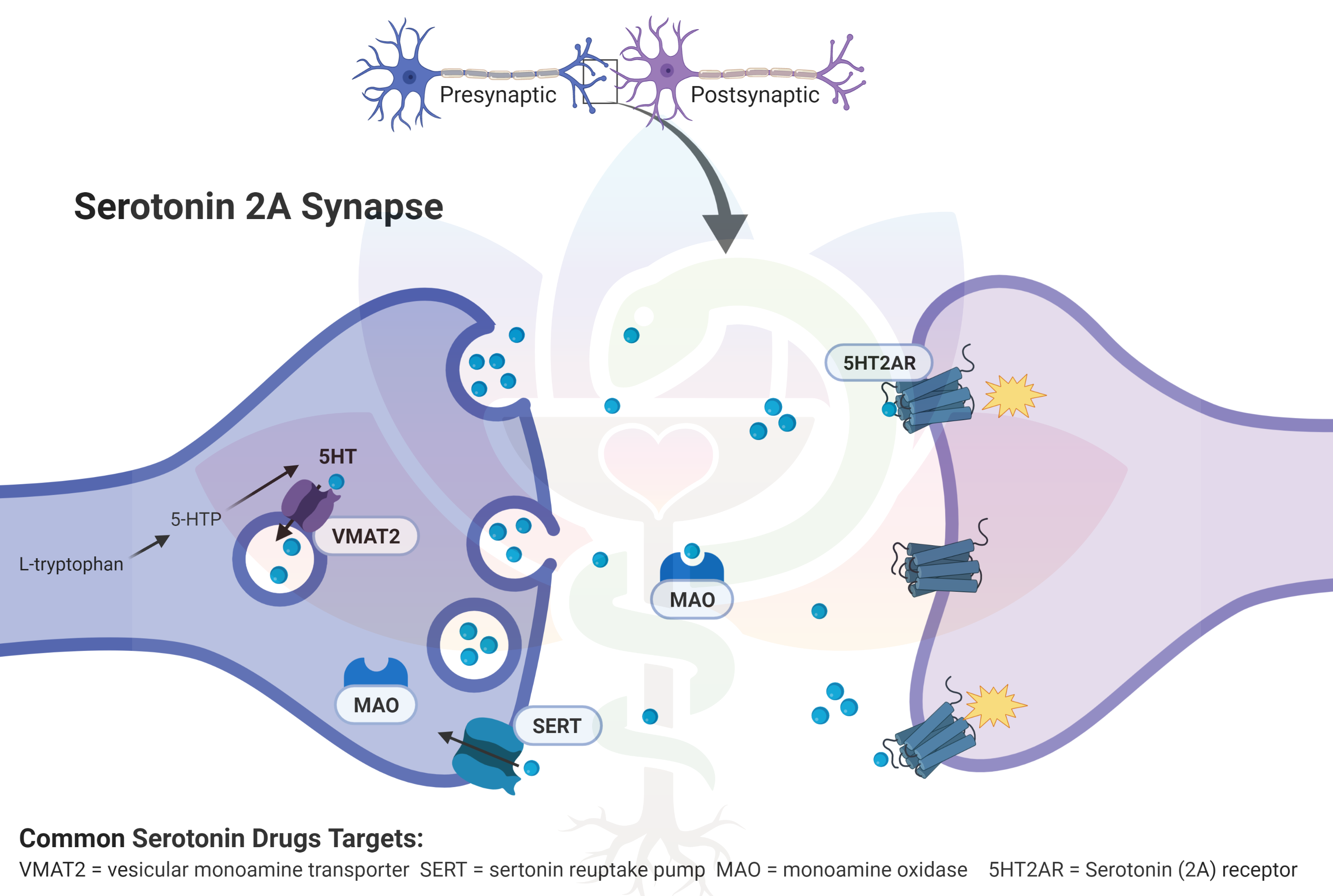 There are several pharmaceutical medications as well as psychedelic substances that have effects on serotonergic synapses or synapses with post-synaptic 5HT2A receptors present. For example, stimulant phenethylamine psychedelics such as MDMA cause ‘carrier-mediated release’ of serotonin by interfering with VMAT2 and SERT, essentially leading to the reuptake pump reversing its usual directional flow [10]. MDMA can also bind post-synaptic 5HT2A receptors directly, however classic tryptamine psychedelics such as psilocybin, LSD, and DMT bind this receptor with higher affinity than MDMA . Interestingly, other medications or drugs can bind 5HT2A receptors, yet do not produce psychedelic effects. These include buspirone, methysergide, and bufotenine (5-OH-DMT). Properties of receptor activation termed ‘functional selectivity’ or ‘biased agonism’ are thought to explain these differences in effects [3]. Several classes of commonly used antidepressants block SERT or the serotonin reuptake pump as part of their therapeutic mechanisms of action (SSRI, SNRI, SPARI, SARI, and TCAs). Other antidepressants as well as harmala alkaloids from the ayahuasca vine are capable of inhibition monoamine oxidase either reversibly (RIMAs) or irreversibly (MAOIs). Lastly, atypical antipsychotics as well as some antidepressants (mirtazapine) and sleep aids (trazodone) are capable of blocking or inhibiting 5HT2A receptors. It should be noted that several of the drugs and medications mentioned have activity that extends beyond serotonin neurotransmission. 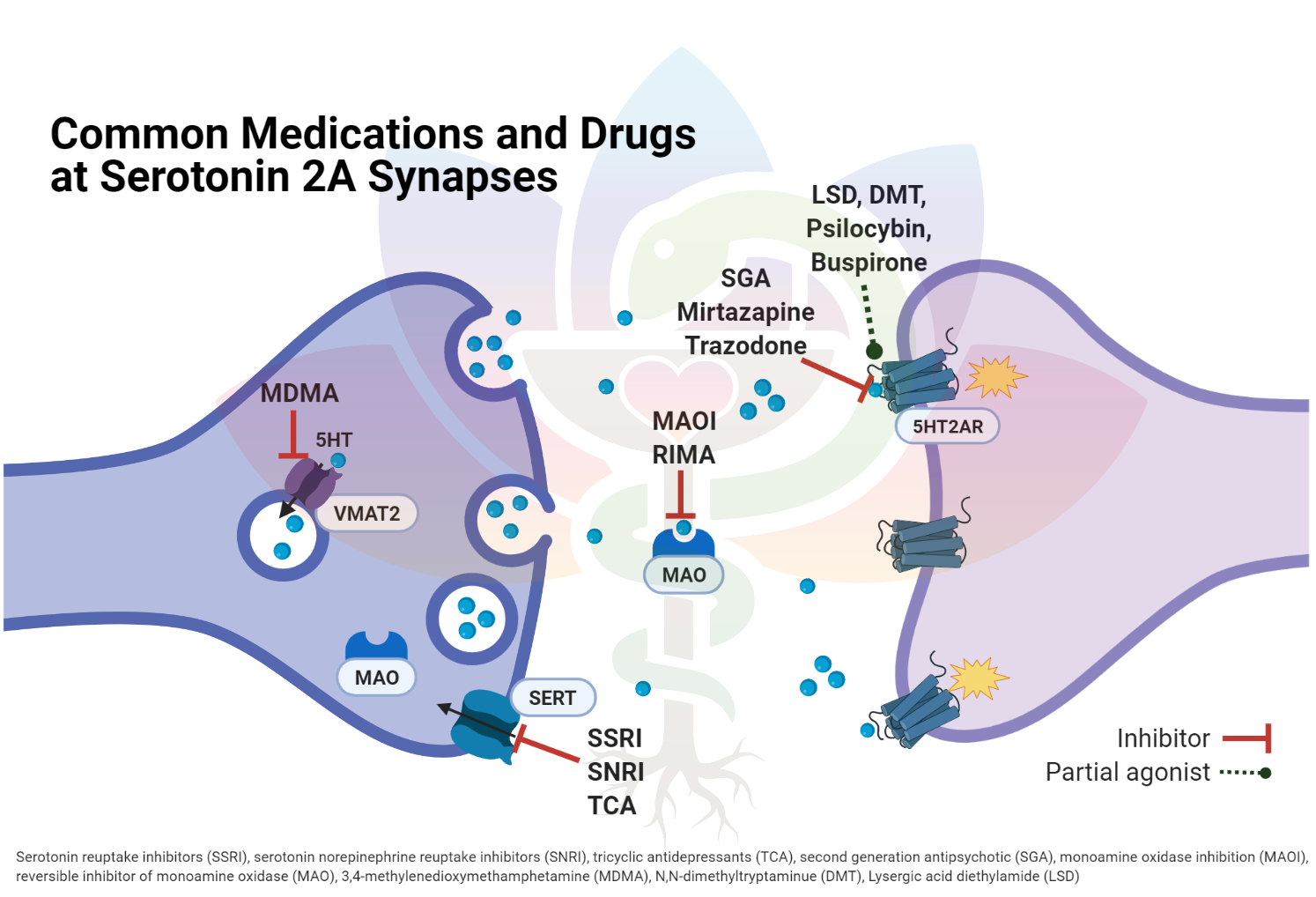 It is often mythically propagated in both lay person and medical literature that mixing any two drugs with serotonergic effects can result in serotonin syndrome, however this is not true [11, 12]. Serotonin Syndrome may best be conceived of as a type of serotonin poisoning and is related to excessive levels of intrasynaptic serotonin. Therefore, only combinations of drugs that are capable of increasing intrasynaptic serotonin AND working in an additive and synergistic fashion can elicit toxic responses. While a spectrum of effects related to increased serotonin neurotransmission is possible, serotonin syndrome is defined by life-threatening toxicity which has cardinal manifestations of neuromuscular excitation (myoclonic seizures) and hyperthermia (>38C or 100f) [13].

Other effects related to increased serotonin may include changes in blood pressure or heart rate, nausea/vomiting, diarrhea, agitation or panic, dilated pupils, and sweating. Some diagnostic criteria for serotonin syndrome are looser and include these less specific signs or symptoms. However, some of these effects can occur with normal doses of SSRI antidepressants or during normal psychedelic experiences. In these cases, it may be clearer to conceive of these as serotonergic (side) effects rather than signs and symptoms of serotonin syndrome. In traditional healing perspectives, some of these effects related to psychedelic use are even considered healing (e.g. purging with ayahuasca). 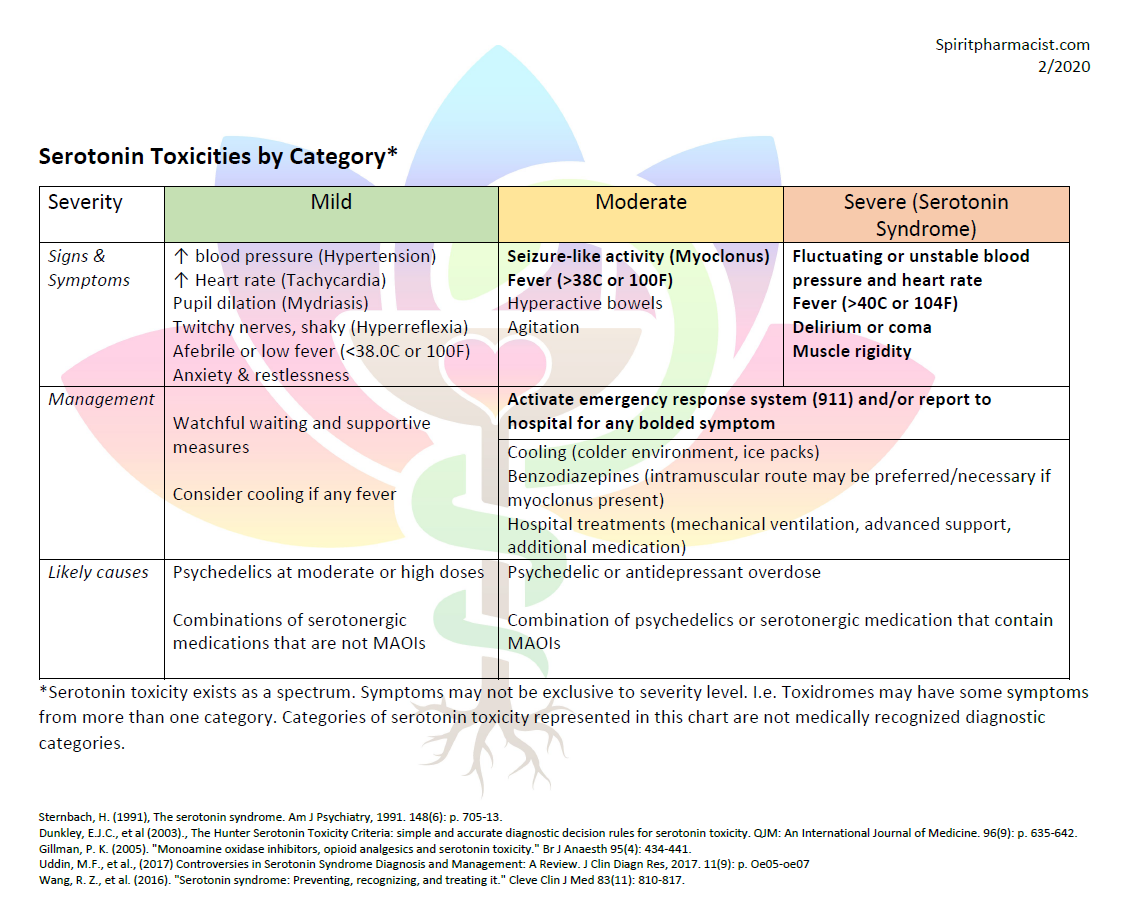 It is perhaps unsurprising that psychedelics have therapeutic effects given the current armamentarium of psychiatric medications relies so heavily on modulation of serotonin neurotransmission. However, there are certainly big differences in the types of subjective and clinical effects of different serotonergic drugs. The interaction and interface between traditional pharmaceuticals that work on serotonin with upcoming psychedelic assisted therapies is positioned to be an area needing much greater research efforts and skilled clinicians to manage if we are truly going to optimize the efficacy and safety of psychedelic-assisted therapy. A solid understanding of foundational serotonin pharmacology among a wider group of persons is a great place to begin these efforts.

Like this article? Learn more about serotonin pharmacology by joining membership or enrolling in the foundation to psychedelic pharmacology 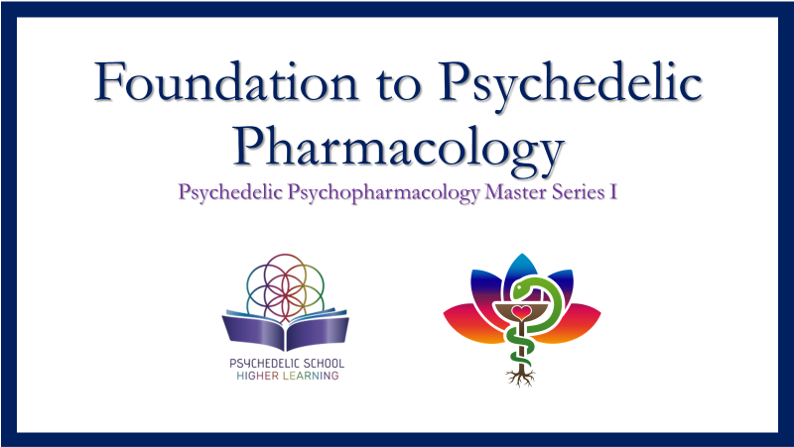