An Introduction to Psychedelic Phenethylamines 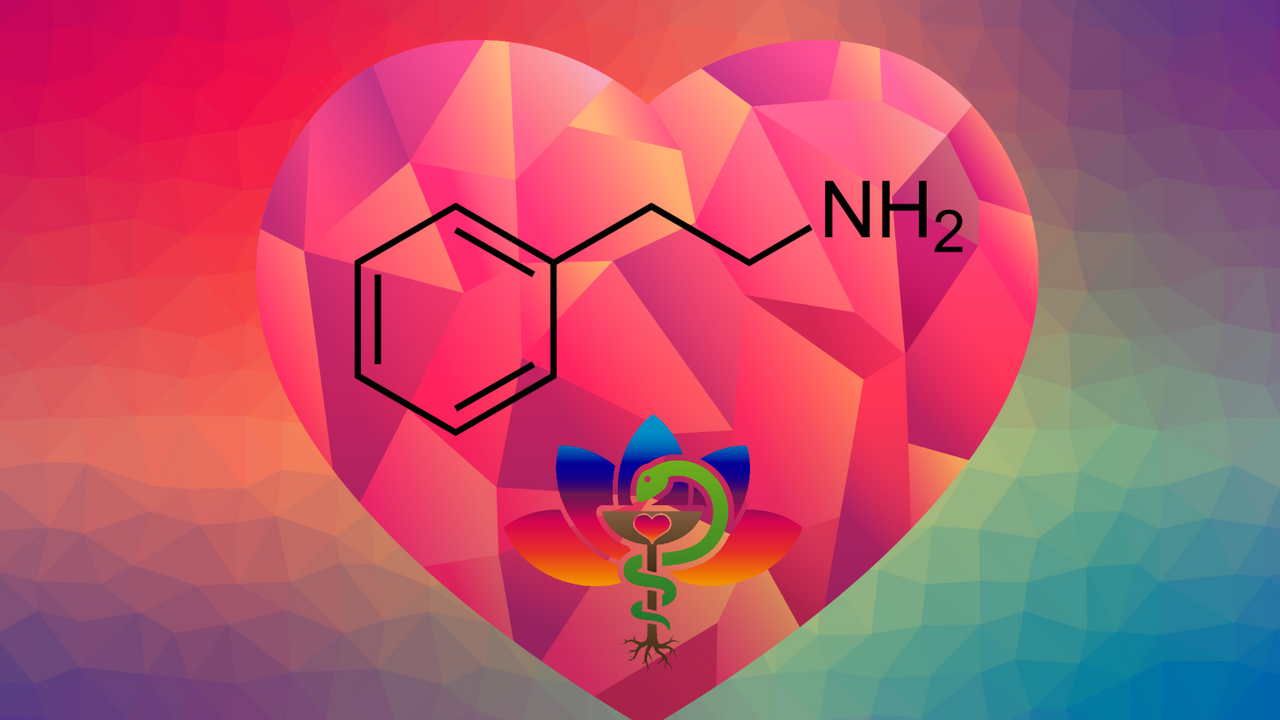 Phenethylamine (PEA) is a neurotransmitter that is naturally produced by our bodies. The chemical structure of phenethylamine also acts as a backbone for a variety of sympathomimetics with activity at sympathetic and central nervous systems.

How do Phenethylamines Act? 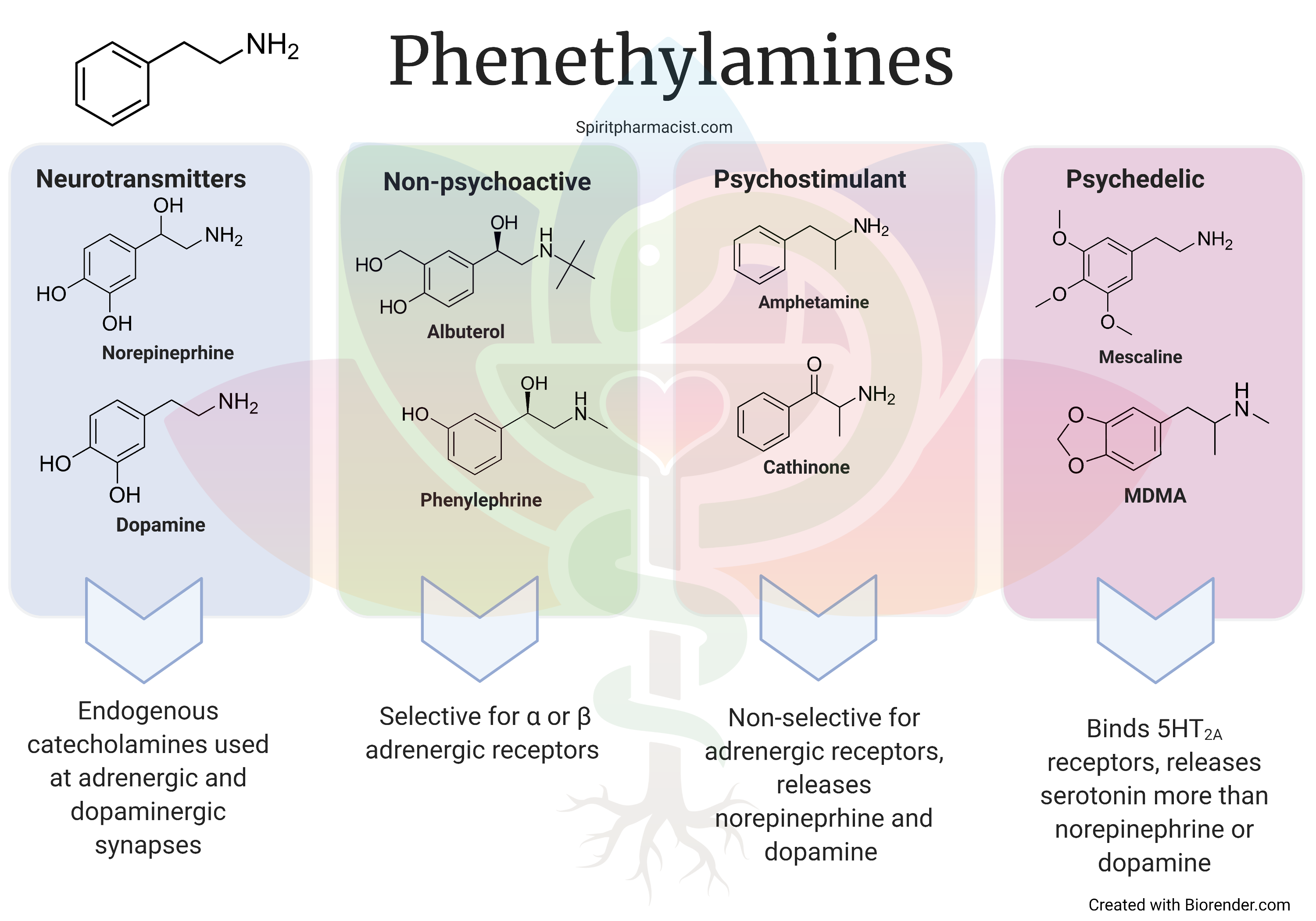 The neurotransmitter class includes phenethylamine itself as well as norepinephrine, dopamine, and epinephrine which are endogenous catecholamines that act as chemical messengers at adrenergic and dopaminergic synapses.

Some phenethylamines have been selectively engineered for specificity at certain adrenergic receptors. For example, albuterol and phenylephrine are selective for postsynaptic               adrenergic receptors. Phenylephrine specifically binds alpha-1 receptors which causes vascular smooth muscle contraction leading to vasoconstriction. Albuterol specifically binds the beta-2 receptors on smooth muscle to cause relaxation which leads to bronchodilation and airway opening. These agents are considered non-addictive and non-psychoactive.

Psychostimulants include amphetamine, methamphetamine, methcathinone and cathinone which are non-selective for adrenergic receptors in the sympathetic and central nervous system. Activation of receptors by these agents induces a release of norepinephrine and dopamine neurotransmitters from the synapse. The release of dopamine by the presynaptic cell is thought to give rise to the addictive potential of these agents.

There is only one phenethylamine that is a classic psychedelic, which is mescaline. MDMA and other novel designer psychostimulants often include serotonergic pharmacology and many act to increase serotonin or bind ‘psychedelic’ 5HT2A receptors. These substances often have considerable pharmacology at other neurotransmitter systems such as dopamine and norepinephrine. These drugs typically release serotonin more readily than norepinephrine or dopamine and are thought to provide a hybrid of psychostimulant and psychedelic properties. MDMA and many others may be arguably better classified as enactogens ‘to touch within’ or empathogens ‘generating a state of empathy’ than psychedelics ‘mind-manifesting’. They are colloquially considered “heart openers” due to effects increasing emotional openness and expansiveness. Many other novel psychedelic phenethylamines and their ranges in effects have been described in Alexander and Ann Shulgin’s work PIHKAL.

More recent trends in designer psychedelic stimulants have utilized cathinone rather than amphetamine as the chemical backbone to create a new genesis of analogous compounds to various amphetamine-based psychedelic stimulants. For example, methylone is the cathinone-version of MDMA. These analogues may share much overlapping pharmacology, although there are also significant differences in their effects. 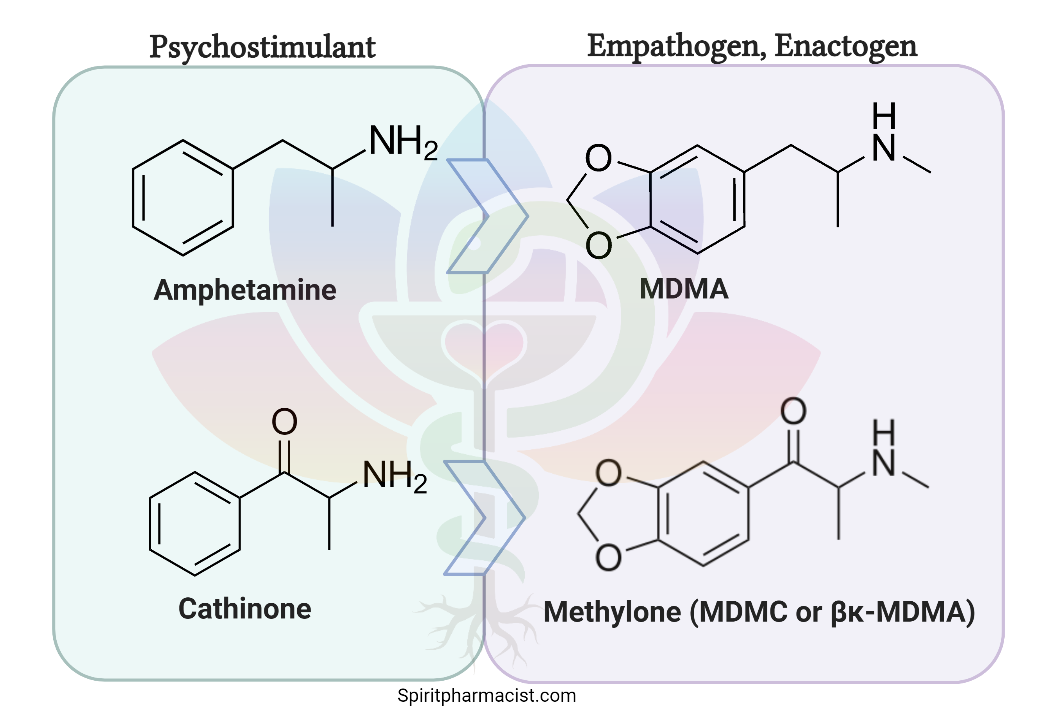 Psychedelics phenethylamines have a wide variety of target receptors, although commonly have serotonergic action and it could be considered a pharmacologic definition of their class that they have activity or bind with 5HT2A receptors. Activity at other post-synaptic receptors (e.g. 5HT1A, 5HT2C) may also influence effects. Their activity at norepinephrine and dopamine neurotransmitter systems is shared with traditional psychostimulants.

MDMA could be considered a reference compound for psychedelic phenethylamine activity. It has a complex mechanism of action which is primarily serotonergic. MDMA causes a release of primarily serotonin from presynaptic vesicles through VMAT2 inhibition. The SERT receptor reverses the normal reuptake flow of serotonin and releases 5HT back into the synapse causing an intrasynaptic increase in 5HT. The process of MDMA’s release of serotonin has been termed ‘carrier-mediated’ release. This increase in serotonin neurotransmission increases activation to the 5HT2A receptors, which MDMA also weakly binds. Due to its ability to increase serotonin there is a potential for serotonin toxicity to occur with MDMA overdose or when mixed with monoamine oxidase inhibitors (MAOIs). Contraindication with MAOIs is common to psychedelic phenethylamines due to so many having significant effects in increasing neurotransmitters.  There are additional neurohormonal effects of MDMA to consider due to the release of oxytocin and antidiuretic hormone. Neurohormonal effects could play a role in therapeutic effects (oxytocin - enhanced bonding and trust) or adverse effects (antidiuretic hormone - SIADH).

The addiction potential of phenethylamines is likely driven by pleasurable and euphoric effects in addition to dopamine-mediated reinforcement. The variability in the ability of psychedelics to reinforcement properties creates a spectrum of addictive potential among agents:

In addition to the addiction potential of these agents there are also toxicities associated with these agents when high doses are used chronically. Neurotoxicity can result in damage to serotonergic and/or dopaminergic neurotransmitter systems resulting in depression, anxiety, fatigue, insomnia, irritability, and difficulty with emotional regulation. As with any agent, overdose is a possibility with psychedelic phenethylamines. Overdose toxidromes may have features of stimulant overdose or serotonin syndrome present including hyperthermia, seizures or myoclonus, muscle rigidity, and complications such as rhabdomyolysis.

Psychedelic phenethylamines are part central nervous system stimulant and part psychedelic. Some may be more appropriately termed entactogens or serotonergic amphetamines than psychedelics. They are pharmacologically diverse in actions, yet all bind 5HT2A receptors. MDMA is being advanced in clinical trials although there are hundreds of other designer psychedelic phenethylamines that could have therapeutic potential. With widespread use of novel designer substances, processes of discovery could be accelerated, however uncertainty in risk profiles creates potential for significant risks to public health.